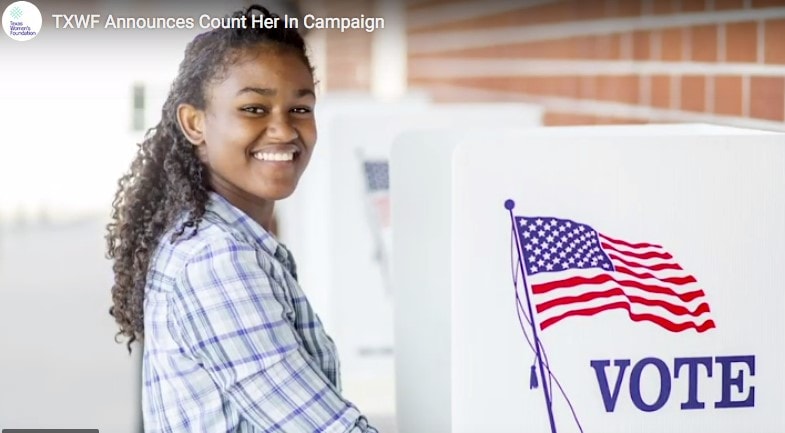 Women got the right to vote 100 years ago. To mark the milestone anniversary, Texas Women’s Foundation launches “Count Her In.” The social media campaign celebrates 100 people, organizations and milestones that advanced voting rights for Texas women. Texas ratified the 19th Amendment to the U. S. Constitution in 1919.

The campaign runs for 62 weeks (June 28, 2019 to Aug. 26, 2020 (celebrated as Women’s Equality Day). By telling stories of women and men in Texas who were leaders in voters’ rights, the campaign hopes to educate and activate more people (particularly women) to register and exercise their right to vote.

Roslyn Dawson Thompson, Texas Women’s Foundation president and CEO, said, “With our goal to transform Texas for women and girls, Texas Women’s Foundation believes that can only take place when women are full participants, and a critical way to achieve that is by motivating more women to exercise their right to vote. This project can be a catalyst for women across the state to understand their rights and use them.”

Christia V. Daniels Adair – A Houston activist who was a suffragist and civil rights leader. Adair worked for Houston NAACP during the landmark Smith v. Allwright case, which ended whites-only primary elections in the South.

Carlos Martinez, Advocacy Alliance Center of Texas – Martinez currently manages the outreach of civic engagement to improve voter turnout in Southeast Texas. “Women are absolutely crucial to our mission… they know how to organize and they have such influence,” he said, speaking about how women are impacting their mission. His goal: 65% voter participation in South Texas by 2020.

William P. Hobby – A key political ally in the Texas suffrage movement, Hobby was Texas governor when the state ratified the 19th amendment on June 28, 1919.
Edith Therrel Wilmans – A suffrage leader, lawyer and mother of three, Wilmans was also the first woman elected to the Texas State Legislature. She helped create the Dallas Housewives League and the Dallas Equal Suffrage Association.

According to Dawson Thompson, “This campaign will be a true reflection of our Texas Women’s Foundation’s history, focus and practices that center on diversity, equity and inclusion.”

Texas Women’s Foundation, formerly Dallas Women’s Foundation, is investing to Transform Texas for Women and Girls, empowering them to build stronger, more equitable communities throughout Texas. One of the world’s largest women’s funds, it is a trusted leader in advocating for and advancing economic security for Texas women, girls and families, and ensuring women and girls are enabled and supported in taking leadership roles in every sector in the state.

With more than $35 million in assets, Texas Women’s Foundation raises approximately $9 million a year to underwrite groundbreaking statewide research on issues affecting women and girls – providing decision-makers and lawmakers with critical data to inform policies, practices and programs in the state. Funds also sustain the Foundation’s $6 million in annual grants, mission-focused gendered asset investments, and support for innovative programs and solutions to help Texas women and girls thrive. Follow the “Count Her In” campaign on txwf.org/countherin/.