Login
Learn about our groundbreaking statewide research “Economic Issues for Women in Texas, 2020”.
Tune in to the Gender Matters™ podcast discussing the importance of women in leadership ft. 2021 Mauraand Young Leader Award recipients.
Via: Dallas Morning News
Women on average still make less than men and struggle to pay for child care, and about 17 percent of all women and girls in Texas live in poverty.
The statistics are even worse for women of color. For example, Hispanic women are more likely to live in poverty than white women, according to a report on women’s economic issues released Thursday by the Dallas Women’s Foundation. The study delved into gender inequality in child care, higher education, housing and health insurance.
“Some of the statistics are really a bummer,” said Roslyn Dawson Thompson, president and chief executive officer of the foundation. “But the reality is, there are things we can do and that we must do.”
She said cities can implement ordinances to protect low-income renters who use federal housing vouchers, state legislators could fund full-day pre-kindergarten programs and school districts could create dual enrollment courses so that high school students can earn college credits.
The economic playing field between genders is equal during childhood. Children live in poverty at the rates of their parents. But once they reach adulthood and live on their own, women are significantly more likely to live in poverty than men, the 2017 Economic Issues for Women in Texas study showed.
“Boys and girls start the same, and then the cliff hits,” Thompson said.
The reasons are many: men typically make more money than women, women are more likely to temporarily leave the workforce after they have children, and women tend to work in lower-paid careers, such as the service industry or home healthcare. About 63 percent of workers earning minimum wage or less are women.
The study was conducted by the Center for Public Policy Priorities and supported by Texas Woman’s University. The report analyzed U.S. Census Bureau data and federal and state agency data, including from the Texas Higher Education Coordinating Board. 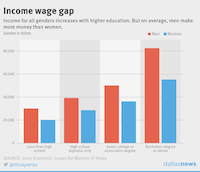 Though incomes increase at higher education levels, women make less at each level than men. And in some cases, a higher-educated woman makes less than a less-educated man. For example, men without a high school diploma on average make more than women who graduated from high school.
Among those who have received a bachelor’s degree or graduate degree, men on average make $25,000 more than women.
“The wealth accumulation that $30,000 difference over a lifetime is extraordinary,” Thompson said.
It’s important to understand the economic differences between men and women to fix the problem, said Frances Deviney, a senior research associate for the Center for Public Policy Priorities.
“We’re not trying to pit a battle between men and women. We’re trying to make sure there’s equity,” she said.
But the differences are worse for women of color. Only 25 percent of Hispanic women between 25 and 34 in Texas have some level of higher education, compared with 34 percent of African-American women, 55 percent of white women and 72 percent of Asian women.
And though many African-American women who finished high school go to college, many don’t graduate. Deviney said studies show that’s because many don’t see other faces like theirs at school and feel like they don’t belong.
Rishun Beasley, a single mother of four, is nearly finished with her bachelor’s degree at Texas Woman’s University. Though there aren’t many other black students in her classes, she was encouraged by an instructor.
“Just to see an African-American instructor made me feel comfortable,” she said.
Nationally, 30 percent of community college students and 15 percent of four-year college students are parents. Of those, 43 percent are single mothers, the study says.
And with the rising cost of child care, many women aren’t able to go to school.
“If I didn’t have child care, I would have to leave school,” Beasley said.
The cost of higher education in Texas has risen 40 percent in 16 years. And the average annual cost of child care in Texas is between $7,000 and $9,000, higher than the average yearly college tuition fees, the study says.
And women in poverty spend 30 percent of their income on child care, cutting into what they can spend on quality housing or education, Deviney said.
Though it would be easy to just call the statistics part of “women’s issues,” the economic impact of the disparity affects every community, said Thompson.
That’s why the Dallas Women’s Foundation is calling on legislators to consider policies that can boost women out of poverty.
But sometimes it’s hard to persuade male legislators who simply have a different perspective because of their own experiences, said Carine Feyten, chancellor and president of Texas Woman’s University.
“We need more women to step up and share these perspectives,” she said.
17 percent of women and girls live in poverty, Dallas study finds2017-02-162017-02-16https://txwf.org/wp-content/uploads/2020/06/txwf-logo-stacked2.pngTexas Women's Foundationhttps://txwf.org/wp-content/uploads/2020/06/txwf-logo-stacked2.png200px200px